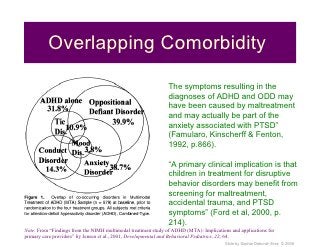 Children with ADHD show signs of inattention, impulsivity, hyperactivity, and other related problems. These symptoms can occur during early childhood or last through adulthood. Children with ADHD often exhibit a variety of other mental health issues, including anxiety disorders, bipolar disorder, conduct disorder, and neurological conditions. Untreated ADHD can lead to poor academic performance, problems at work, and difficulties with relationships. Therefore, it’s important to find the right treatment for your child as early as possible.

Children with ADHD are often restless and do not listen well to verbal instructions. They often fail to complete chores, schoolwork, or workplace duties. They also have trouble concentrating, can’t sit still, and dislike mental effort. They also frequently lose important items, like mobile phones and eyeglasses. Often, they fidget or squirm and cannot wait for their turn in line. They can’t sit still, so they tend to wander while in line. Some ADHD children also feel restless, fidgeting, or hyperactive.

Hyperactivity is the most noticeable symptom of ADHD. Most children are naturally active, but a child with ADHD may try to do several activities at once, or jump from one activity to another. Their restlessness can be so intense that they can’t sit still or play quietly. While a child with ADHD will often be creative and enjoy activities, they will also be easily distracted, and may be highly competitive and hyperactive. If you notice these symptoms in your child, you can seek a proper treatment for your child.

There are several forms of treatment for ADHD. Pharmacological options include stimulants such as amphetamines, methylphenidates (such as Ritalin), and Concerta. Other forms of treatment include nonpharmacologic interventions such as psychosocial and behavioral therapies, dietary supplements, and complementary and alternative medicine. These treatments address the core symptoms and functional impairments associated with ADHD. However, if you have questions about whether or not your child’s treatment is right for him or her, it is best to seek the advice of your doctor.

In order to be diagnosed with ADHD, your child must show at least six of the nine symptoms, and they must have been present for at least six months in two settings. In addition, the symptoms must interfere with your child’s development. If these criteria are met, you’re probably suffering from ADHD. Physical examinations may rule out another underlying health condition. But if your child exhibits at least five of the nine symptoms, you’re likely to receive the right treatment for ADHD.

Although ADHD treatment is effective for children and teens, some parents are afraid to seek it for fear of the stigma that comes with it. However, it’s essential to discuss with your child about the differences in abilities and how you and your child can best handle each of their unique symptoms. Often, treatment can help your child develop new skills and ways of coping with the symptoms, allowing them to lead more normal lives. It is important to note that many adults do not have ADHD.

Parents of children with ADHD face many challenges. They worry that they are raising their child incorrectly or that he or she has some other problem. Teachers may dismiss the child as lazy, and even spouses might consider the child uncaring. But what can parents do? Here are some suggestions:

One of the main causes of ADHD is genetics. Several studies have suggested that ADHD runs in families. Adverse environments such as low birth weight, poverty, and social class are associated with higher risk. Adverse childhood experiences such as bullying, negative parenting, and family discord have also been linked to increased risk of ADHD. However, these factors are not definitive causes of ADHD. Rather, they seem to modify the expression of ADHD in genetically susceptible individuals.

Pregnancy can be one of the causes of ADHD. High blood pressure during pregnancy, preterm delivery, and prolonged gestation may all affect the child’s oxygen supply. Tobacco use during pregnancy has also been linked to ADHD. Although not directly related to ADHD, it can influence the child’s development and symptoms. Pregnant women who smoke and drink alcohol are at higher risk for their children to have ADHD. Other perinatal factors include maternal diet, maternal infection, and specific medications.

Benjamin Guffoggio
Is ADHD a Form of Autism?
What Jobs Are Good For People With ADHD?